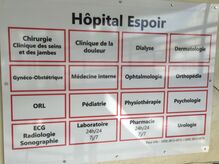 As the number of children in the care of Fondation Pour Les Enfants d'Haiti  increased, so did the need for medical care.  Trips to the General Hospital in  Port-au-Prince exhausted much time and patience; the cost was high, and the  satisfaction was low. The need for a well-run, modern pediatric hospital was great.  However, not only did it seem impossible to raise the funds necessary to construct such a facility, but there was an embargo in place prohibiting all building materials from entering the country.

Looking to the Lord  for guidance, the decision was made to begin construction, proceeding as money  became available.  By 1994 a new hospital building was ready to care for  children on an outpatient basis.  A year later, 1995, full pediatric services  were ready.  Today, a fifty-bed hospital had been built!

Today, Hope Hospital is overseen by Dr. Max Dernnisante as the medical director and Dr. Darlene Gousse, is the hospital's executive director.

The new pediatric ward was nothing short of a miracle. FEH needed to expand the hospital but we had no room nor land to do so. It was discussed at the last USFCH Board meeting in June and Gladys told everyone that she was praying. Prayers went up and blessings came down!. LEAP is a medical organization doing plastic surgery, ENT and Urology surgery for children, working with FEH since 2010.  Gladys shared with them our need and vision and we both prayed together.  The Ortega family, good supporters of LEAP, owns a construction company and agreed to come down with a team of 6 and in 2 weeks had finished most of the work. We took one month to finish everything.

Janet and Pat Ortega, the builders, a wonderful couple from Oklahoma owners of Rocking O Construction also donated some of their own funds.  LEAP raised the funds to cover the rest of the construction expenses.  LEAP was scheduled to come on a surgical mission on November 6th so we scheduled a ribbon cutting ceremony on the 7th as we wanted to include them in the ceremony.

"We have not yet moved in as we are finishing what was left to be done. We hope to officially move in Dec 13, 2014. There will still be needs for equipment and furniture, but I know God will continue to provide" said Gladys.  God is good.